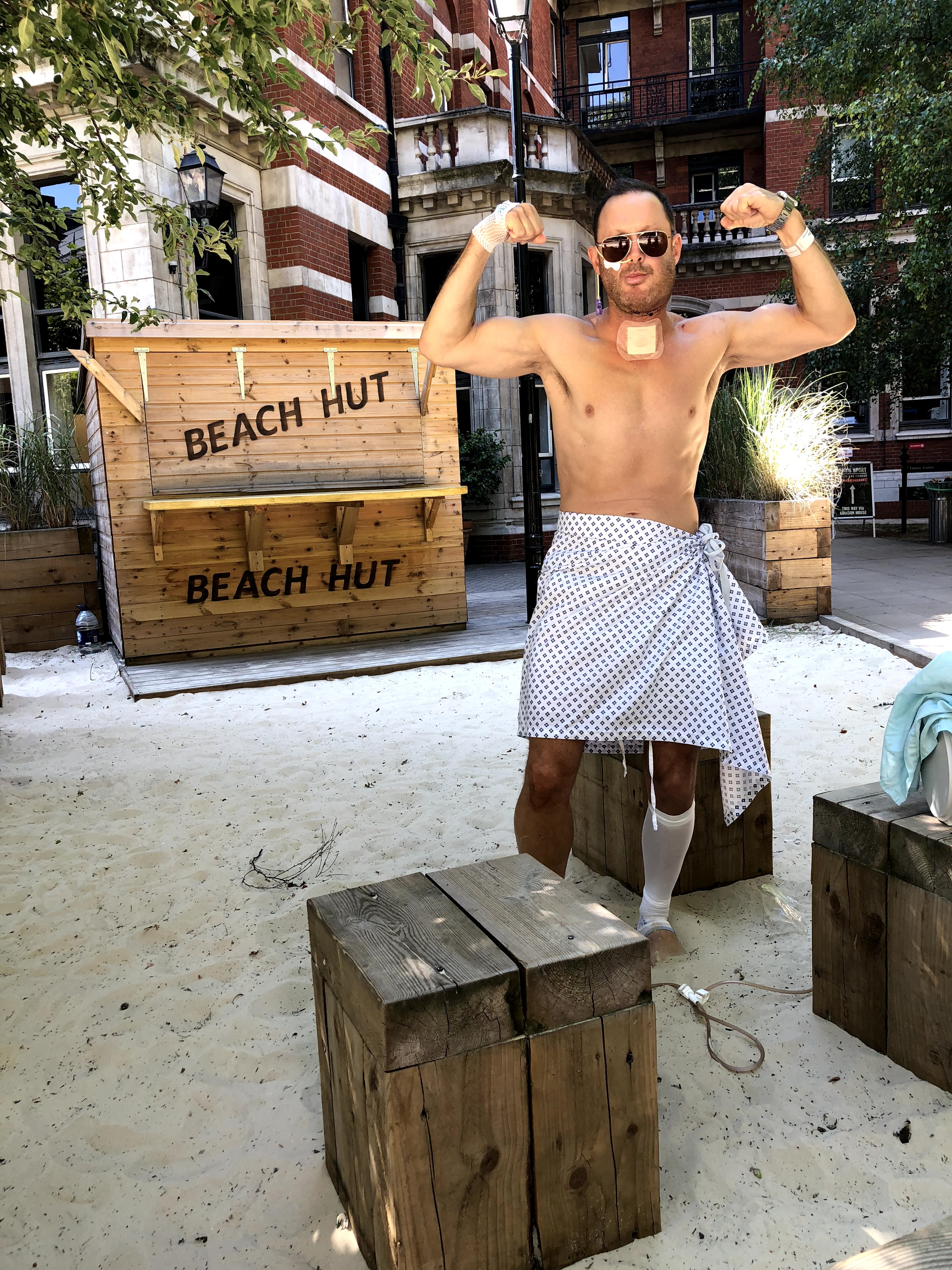 Pictured: William Tapley a week after surgery in London, England at Guy's Hospital.

On December 15, 2017, in London, England, I married the man I will spend the rest of my life with.  It was a romantic dream-come-true wedding with all of our children, my new British family, and many friends attending, and there was even an old-fashioned double-decker bus for our wedding party.  I had never met anyone like William, who was seizing life like one big adventure.  It was contagious and I wanted to be right by his side through it all.

But something was not quite right. In February 2018 Guy's Hospital informed my husband that he had pre-cancer and it might spread quickly. It started in his mouth where he received laser treatment. But cancer came back months later into the jawbone and was not stopping its journey. We had only been married a few months but both of us decided to be optimistic, do all the things we could now to make the inevitable journey more tolerable and survivable. What was astonishing was witnessing William take his workout routine, before the surgery, to the next level as if he was getting ready to run a marathon for life.

William had faced major challenges in the past. He had lost his mother at age 6 from cancer, the death of a newborn daughter and survived an incomprehensible ten-year battle with the English Family Justice System, and finally won his battle to raise his two older children after their mother sadly passed away from cancer.

William is simply a survivor because he's a “Scrapper.” A “Scrapper", so eloquently put by Regina Hartley/TED Talk, is someone who has experienced post-traumatic growth. A person who gets back up after being hit and figures out a way to survive. She was referring to someone who may not have the best resume. But William’s ability to be humorous, a brilliant entertainer, a keen listener, never losing hope and believing he has a sense of purpose in life, prepared him for the ultimate challenge. When faced with trauma, we can all possess these qualities if we see ourselves as optimistic rather than pessimistic. When the bad news hits you, let it bring out the best in you, and towards living a more optimistic life, even if you get stymied along the way.

Today, William is cancer-free thanks to the outstanding surgeons at Guy's Hospital. He is living in Northern Florida with his wife (that would be me), two older children, and stepchildren. He is enjoying life on the Saint John’s River, being warm and having lots of sunshine and daily hikes with his faithful friend Enzo.

Footnote: William’s extraordinary path in life included: training at RADA, growing up in Australia and England, finishing schooling in America, serving ten years of military service with the world’s second-oldest regiment: the Honourable Artillery Company in the City of London, representing Britain in the 1996 Camel Trophy-Kalimantan (off-road driving), making the first-ever motorized crossing of the Borneo jungle, playing rugby (clubs have included London Wasps and Harlequins), riding motorbikes, sailing yachts (won the 1999 Presidents Cup in Fiji) and driving cars across deserts for charity. William has also frequented 47 countries. His acting career landed him in; Band of Brothers, Second in Command, The Secret Agent, Stormbreaker, The Contract, V for Vendetta among others, and most recently was seen in the Netflix Original, The Crown (TV Series).

The Stymied Optimist asks to please comment on poor grammatical errors if you see any?Thank you for your kindness!

*If you are enjoying The Stymied Optimist weekly articles, please consider visiting one of the education and wellness affiliate links. No need to purchase anything, a visit generates small revenue. Thank you!!

The age of consumerism